If there was a competition for the most lunatic band name ever, I cannot imagine anyone who would be able to beat this Belorussian act. However, although the name is probably the very first thing everyone will notice, there are many more interesting issues surrounding the project. All this together was the reason why we have decided to contact the band and ask a few questions not only about the name but also about the overall concept or the upcoming full-length album…

Hello to Belarus and thanks for doing this interview! First of all, I would like to sort of apologize that I will ask so many questions about the band’s name but I believe it is worth it in this case. Actually, this my first question – are you aware of the fact that most of people will probably pay attention to Eximperitus… because of its unusual name than because of the music itself? Does it bother you?

Ave Sathanas! No, it doesn’t bother me a bit. When the album is out, random people will just pass by, the ones who see the essence will stay.

Before we move further, please explain what the band’s name actually means – in detail, if possible. You have already stated that the name is a neologism which uses more languages. Can you describe to us the particular parts of the word, from which languages do these parts come from, what they mean and how the word should be interpreted as a whole? Also, how one should pronounce that beast of a word?

The name is pronounced as “Eximpe-ritu-serqethh-zebib-shiptu-gakkath-shul-weliar-za-xul-um”. An author’s individual agglutinative neologism. In it’s creation there were used some Latin, Ancient Egyptian, Akkadian and Sumerian terms of the Chaosatanic tradition. It entirely reveals the unutterable name of the antiuniverse. When divided into fragments, it creates the magic spell of the formless Lords of the prior Darkness. I gave the key to cognition. Then everyone decides for themselves how to use it.

Do you know if you have the longest one-word band name ever? Do you think there is someone with a longer name? I know that there is a grindcore band called Paracoccidioidomicosisproctitissarcomucosis from Mexico but their name is still eight letters shorter than yours…

I think it doesn’t matter.

Beside the band’s name, the titles of your songs and of upcoming albums are monumental as well. Surely there are more bands having long titles, e. g. there was a band like this in the Czech Republic as well – a black metal act Maniac Butcher whose lengthy titles of songs have become one of their trademarks. Do you aim for something similar – to obtain a trademark of having unusually long titles? If not, what is the reason to name your songs like this?

I wasn’t pursuing particular reasons while making long song titles. This style was worked out through the years of lyric writing experience. Being impressed by the works of Abruptum, Ophthalamia and of course Maniac Butcher it was interesting for me to make a whole story of a title. Later, it became inseparable feature.

Okay, let us move to something else than names for a while. If I have not missed anything, there are no exact information on who plays in Eximperituserqethhzebibšiptugakkathšulweliarzaxułum and how many members the band has. Actually, it seems to me that it is a one-man project – is this guess correct? Can you tell us something about yourself (yourselves)? In what bands you have played before, what is your musical background etc…

I can only tell that currently we have full line up. Names don’t matter. The only thing that matters is the result of collective effort. (Just to make it clear: the musicians who were engaged in “Promo 2013” were not participating in the recording of this album).

If I am not mistaken, Eximperituserqethhzebibšiptugakkathšulweliarzaxułum have not performed live so far – is that correct? Do you plan to bring the band onstage in the future?

I don’t see any obstacles for this. We are planning to play a few exclusive album supporting gigs in future. In a while.

In June, your debut full-length album “Prajecyrujučy sinhuliarnaje wypramieńwańnie…” (sorry that I do not write the whole titles, the reason for that is quite obvious I believe…) will see the light of day. So far, you made two songs, “Imknieńnie apantanaści hniewu…” and “Rytuał pryzyŭnoha zaklionu…”, available for streaming. Compared to your previous effort “Promo 2013”, those two tracks feel like having more epic and atmospheric touches despite still being technical death metal. Is this the way you want to continue in musically? What should we expect from the album?

Official release date is 8th, July (digital version will be already available in June). I wasn’t entirely satisfied with the stuff on “Promo 2013”. Back then I already realized that this project demands more atmospheric music. The album will include 8 treatises about magic framed by the storm of meditative guitar riffs. The majestic motives of Ancient East will braid with harsh curses of a sacrificer. The conceptual and mature piece that will get you into the atmosphere of war and chaos.

Anyway, you initially announced that “Prajecyrujučy sinhuliarnaje wypramieńwańnie…” should be out in summer/fall 2015… what is the cause behind the delay with the release of the album? And why did you choose to cooperate with Japanese label Amputated Vein Records?

The main reason behind this is that we needed more time to reach the expected result. And we chose Amputaded Vein Records because we knew about the high professionalism of the label owner. Naturally, we accepted the received offer.

Could you tell us something more about the concept of the album and of the band as a whole? I unfortunately do not understand the titles and Internet translators are bit ineffective in your case but I can guess the meaning of some words thanks to the similarities to my language, and it is quite obvious that subject matter of your music is indeed interesting – probably even more than the game with crazy-long titles. So what do you sing about? Will you ever provide English translations of lyrics?

The general concept is multi-faceted and it touches upon various themes. Here you’ll meet: the Gods of Ancient worlds, the description of rituals and magic systems, the kings of Ancient East whose names are buried in the ruins of deserts, references to the theory of paleocontact, the journeys between the worlds and the darkest philosophical postulates. The brochure of the album will include additional English version of lyrics. Also, English version will be available in the digital download pack. Thus, everyone will be able to get into the essence on their own.

Do you have any professional or vocational interest in ancient Egyptian, Sumerian, or Babylonian history and mythology? And what about astrophysics? Have you ever studied any of these things at university, or it is just, let’s say, a hobby? And how did you get to philosophies like Chaos-gnosticism?

I dedicated years studying these topics. I study everything by myself. This is a part of my life, not just a hobby. What concerns the philosophy of Chaos-gnosticism – this is my major interest and basic doctrine of the project. The format of interview does not allow me to reveal the topic entirely, but later in future I will dedicate it a separate work.

One tricky question. You include so many lyrical themes that one could see it as a shallow mixture of wannabe-deep topics. Is it possible to put so many topics into one band while maintaining a certain depth? And how are things like Chaos-gnosticism, astrophysics, radical pessimism, mythology of ancient Egypt and Babylon, misanthropy, or Satanism related to each other?

And what makes it impossible to preserve depth when you touch upon multiple aspects of one. And who said that those topics should be related to each other? Those are the facets of the same essence which exist separately. Like chapters of a book. One thing in common here is the cognition of structure of death. Lyrics are represented as acroamatic cipher which should not be taken literally. This is what the Ancient cultures wanted to get to us concealing their knowledge behind the veil of mythology and myths. 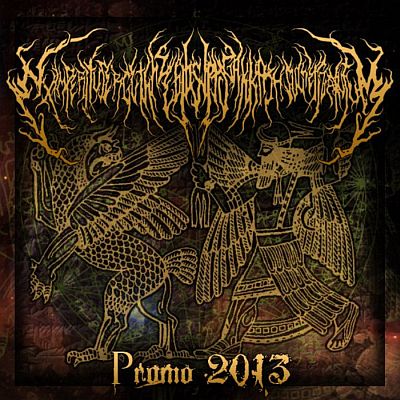 The cover of “Prajecyrujučy sinhuliarnaje wypramieńwańnie…” was created by none other than Pär Olofsson who is undoubtedly the master of death metal artworks. Why did you decide to have him handling the cover? How did the cooperation with him go? Did you tell him what leitmotiv should the artwork have, or did you give him a free hand when creating the cover?

I was always admired by the works of Pär Olofsson. So, when the moment came I knew exactly whom to ask. I briefly explained what should be pictured and additionally mentioned the titles of album and tracks. You see the result.

Alright, I have the very last question. We usually end our interviews with the not-so-serious questions and this one will not be an exception so – how sad does it feel that fans most likely will not be ever able to chant the band’s name at gigs? Thanks a lot for the interview!

This is possible. But this is not the first neccessity. 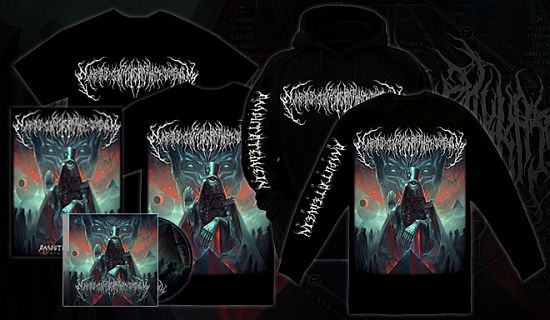