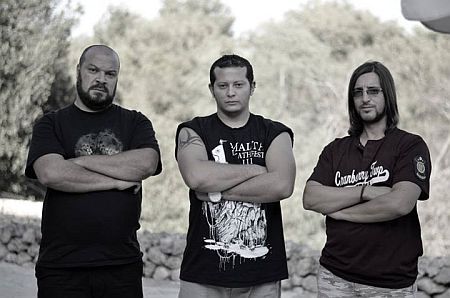 Hello! Let’s start with a simple question. What does the word „Lelahell“ actually mean? Google Translator told me that it should mean something like „for parents“ in Arabic… is it a good translation?

Lelahel (with one ‘l’ letter in the end) is an angel of the zodiac exercising dominion over love, art, science and fortune. We appeal to this being of light for good luck and good fortune. We added an ‘l’ because there is already an italian rock band named Lelahel, and Lelahel is also my nickname. so to make difference between them I added a second ‘l’ in the end of Lelahel. So it is a completely a bad translation lol!

And one more similar question – who or what is Abderrahmane that is (re)born in the title of your record „Al insane… The (Re)Birth of Abderrahmane“?

The album have two titles: „Al insane“ which means the human in Arabic and which is talking mainly about the insanity of humans. The second name is a metaphor that refers to the Algerian metal scene and we hope that this album will contribute to its (re) birth .

Abderrahmane is my son and was my father (R.I.P), this albums is dedicated to his memory!

I have to confess that I was a little bit surprised with one thing when I listened to your albums. The full-length „Al insane… The (Re)Birth of Abderrahmane“ is purely in death metal vein. However, your first EP „Al intihar“ contains some non-death metal influences like one grindcore passage in „Emperor“ or some oriental melodies in „Into the Past“ (while on „Al insane… The (Re)Birth of Abderrahmane“, I noticed only the intermezzo „Imzad“ to be non-death metal). Why did you decide to be, let’s say, more orthodox on your latter effort? One could expect that the latter will contain more unusual things…

It wasn’t a choice but just the feeling. But we don’t want to sound too original or too different.

I know that the full-length album was released last year but – do you already have any new material on the way? Also, have you ever thought about incorporating some folklore influences from your region into your music? I would actually love to hear some things as it was hinted in „Into the Past“…

We are actually in the writing process of the second full length. It will contain more  ethnic parts and we’ll  increase a little bit the technical level of the overall music.

In your songs, you combine both Arabic and English languages, and if I am not mistaken, there is also a French-sung track „Hypnose“ on your latest album. How do you choose which language to use in a song? Have you ever thought about using just one language?

Mixing English with Arabic (traditional and Algerian) is a part of lelahell’s  identity!

In the future we may use other languages but we have nothing in mind yet!

On your first EP „Al intihar“, you covered „Freezing Moon“ from Mayhem. As a death metal band, why did you choose to make a cover of a black metal song (especially so famous one)? Do you plan to record any new covers in the future?

We choose this song becaue it is a great one, and we wanted to play it in our way!

We don’t plane to record any covers maybe as a bonus track but nothing decided yet!

As far as I know, you have already played in our country twice – in Prague two years ago and then in Mladá Boleslav just at the end of 2014 – but I unfortunately haven’t visited either of them so I don’t know how it was and if the attendance was good. How do you remember these shows? Did you enjoyed them or were they average from your point of view?

The first show in Prague was in the famous venue Modra Vopice, It is a very good place with nice poeple, but the bad thing is that our gig wasn’t well promoted and we played in the end of summer, so the audience was poor. The second gig was in Mlada Boleslav last december in the great orthodox club, it was our best show of our tour, good sound, warfmful audience and we selled a lot of merch here, and also the club Owner Farář Hellvicar is a very cool guy! i hope that one day we’ll play again in this great club!

Did you have chance to also take a look around when you were in the Czech Republic? I noticed that you have some photos from Prague on your Facebook… e.g. pictures from Old Town Square or Wenceslas Square. How did you like the city?

You know when you are on tour you don’t have so much time to hang out but we visited some cool places in Prague like the old town the charlie bridge, and the most impressive about this city is that it looks modern and old at the same time.

I can imagine that you probably receive question like this in every interview from abroad but I have to ask. How does the Algerian metal scene look like? Encyclopaedia Metallum shows only 23 bands in your country (including Lelahell) and only about half of them are active which hints that the scene probably isn’t really big… Is that right? Are there any nice venues to play in, any zines, labels, etc.? How many metal fans are in Algeria? When you do a show there, how big is the usually the attendance?

The scene isn’t so big as you can imagine, but it is existing since more than 2 decades and there are some good promising bands . There were many bands in the past (since the early 90’s) but always the same problem the bands exist for 3 or 4 years and split up.  And the major problem that the bands have to deal with is the absence of venues for playing metal, actually in Algiers we only can play in one or two venues . Unfortunately there are no labels and no zines, just some facebook pages. When we play shows actually the audience is around 100-200 depends on the band and the day.

And one more similar question – just about music in general, not only metal. How the situation looks like in Algeria when we speak about other non-mainstream music genres than metal? What kind of music is popular in your country?

In Algeria the most popular genres are Rai, Gnawi and traditional Algerian music like chaabi, andalous. There are also some more UG genres like Rap, Electro and punk. 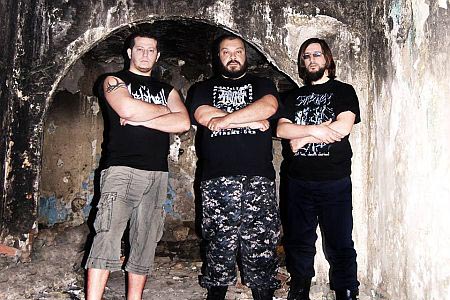 Okay, we’re getting to the end. We aren’t fans of usual „say something to our readers“ so instead of this, tell us some cool Algerian joke. :) Thanks a lot for your answers and for your time!

“If you want fish you have to wet your ass” and stay metal!