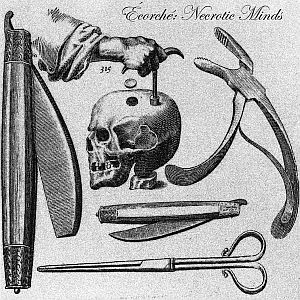 The 43 minute album is divided by 5 songs of experimental industrial metal. Distorted Filosofem era BURZUM vocals delivered upon sharp tremolo guitars as propaganda to an apocalyptic order. The music takes many forms including fast black metal styled blast/guitar madnesses to slow nightmarish breaks with the insanity of mechanic drumming holding together this mega agent of desolation. There is a good deal of sound effects and variety of guitar and bass leads that keeps you guessing as to what’s coming next in this torturous nightmare. The last two songs are both 13- minute industrial ambient pieces of utter madness. The production is very strong and raw which makes this experience a total cinematic time end. This is a very innovative album that is a well worthy addition to the madness of Merdumgiriz releases.

Hailing from Philadelphia, Pennsylvania, Écorché combine black metal with electronic, Industrial and atmospheric music for a sound that defies comparison! Écorché is a two man band consisting of JGW on vocals, guitars, synths and programming and Wolfman on bass, synths, and samples. Formed in August of 2014, the roots of Écorché were actually laid down much earlier. JGW and Wolfman played a few shows in Philadelphia about 10 years beforehand under the name Écorché, though the sound was quite different – more akin to early 90’s Industrial music. Re-formed in August of 2014, they have kept their Industrial roots, but hardened things up by fusing it with Black Metal and also adding atmospheric elements for a truly unique sound!

As with his work on all Merdumgiriz releases, each Necrotic Minds CD is handmade by Emir Togrul (YAYLA, ViRANESiR, BLLiiGGHHTTED); who sprays the discs, cuts and inserts the prints for the jewel case, hand-paints the t-shirts and patches and pretty much makes everything from scratch.

For more ÉCORCHÉ, visit the links below:

Pseudocommando – A Home Beneath the Floorboards
4.1.2020