Polish extreme grindcore/experimental outfit ANTIGAMA has revealed more details about their upcoming new album “The Insolent” which will be out in May 2015 by SELFMADEGOD RECORDS worldwide.

The new album has been recorded and mixed in January and February 2015 in Warsaw’s JNS Studio by Paweł Grabowski and ANTIGAMA. The mastering was done by Scott Hull (Pig Destroyer, Agoraphobic Nosebleed) at Visceral Sound, Bethesda, MD.

The new record brings 10 tracks of unorthodox, fast forward-thinking grindcore metal. Some titles are “Reward or Punishment”, “Foul Play”, “Out Beyond”, “The Land of Monotony”. The album features a very special guest appearance of the legend of Polish electronic music scene Władysław “Gudonis” Komendarek

“The Insolent” will be available as limited CD, LP, MC and digital download. The official release date is set for May 7th 2015. 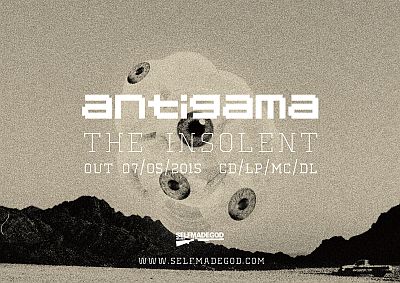