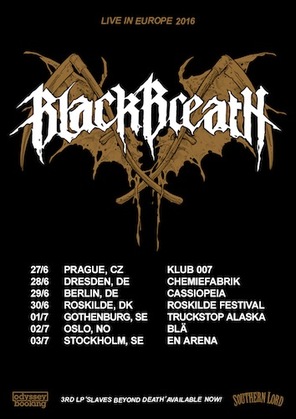 The wait is over, death metal ragers Black Breath will return to Europe this June and July for a short run of dates, including a scheduled appearance at Denmark’s acclaimed Roskilde Festival. Making for a summer of pure savagery, these dates come off the back of the band’s latest LP Slaves Beyond Death which was surely one of the highlights of the extreme music underground last year.

Seattle’s Black Breath proves why these d-beat death warriors have been highly-sought after since their inception. Recorded with Kurt Ballou (Converge) at GodCity and mastered by Brad Boatright at Audiosiege (Nails, Integrity, Obituary), Slaves Beyond Death shows the quintet’s groove-laden amalgam of hardcore and death metal with an even harsher, bleaker tone than before, with fifty-minutes of adrenaline-fuelled oppressiveness, each of its eight tracks running between five and eight minutes in length. The Seattle five-piece are entirely relentless in their intensity, presenting innumerable ferocious riffs across the eight songs, wicked inventiveness at the heart of its might. Galloping, triumphant melodies reminiscent of Sweden lead in to gruelling slammers that unravel at a torturer’s pace, while the rasping death-rattles from vocalist Neil McAdams paint a vivid picture of unending suffering in life and beyond the grave. Devoid of self-serving technicality and bombast, Slaves Beyond Death works torrents of scorn into lively, undeniably entertaining songwriting, an enviable quality that has been present in all of Black Breath’s material, and is certainly still the case now.

Slaves Beyond Death is out now worldwide on CD, and digital formats. Order the album from the Southern Lord store.

“Slaves Beyond Death transforms them from outstanding newcomers to one of the most powerful metal bands of the contemporary scene. It is a blistering song cycle of expansive and complex compositions dripping with bloodlust and violence…Slaves Beyond Death is, without doubt one of the best releases of 2015.” – ROCK A ROLLA

“If the previous album was an aggressive musical tornado that was over before you knew what hit you then ‘Slaves Beyond Death’ is like a slower moving hurricane that is equally as destructive put pummels your senses for longer.“ – IRON FIST

“It’s a stunning display of heavy metal and deserves immediate attention… A mind blowing and resounding triumph from the incoming masters of metal!“ – 5/5 ALREADY HEARD

“The influences may well be worn on their sleeves like a badge of honour, but Black Breath have produced a mini death metal classic right here. Storming stuff.“ – 5/5 ONEMETAL