For twelve years now, the three messengers of MoRkObOt have been elaborating on their discography with a series of increasingly perplexing and infectious records. GoRgO is the brand new album of low-end noise rock origami from Lin (bass), Lan (bass) and Lon (drums), to be released on Supernatural Cat this September.

MoRkObOt’s dual bass methodology creates a debauched entanglement of corkscrew rhythms that shake off the notion of sterile technicality, rather, theirs is a fleshed out monster that stomps to a different octave. Honing in on the minutiae of their interlocking slides, slams and slippery beats, MoRkObOt create a unique and lively psychedelia akin to being in an accelerating whirlpool of their malicious creation. Heaviness is achieved in the most refracted of manners, letting both bass pincers extend in melodic directions around the relentless, booming drumming, then snapping shut with mechanised indifference, hitting hard and fast over and over. The gurgling fountains of noise Lin and Lan conjure over the duration of GoRgo place them in the highest echelons of noise rock innovation, while Lon’s percussion is both the unstoppable force and the unmoveable object. 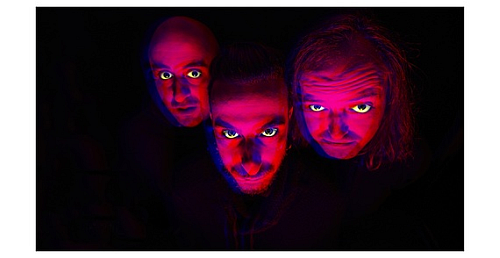 GoRgO, their fifth full length, was recorded from November 2015 to January 2016 by Giulio Ragno Favero (Zu, Teatro degli Orrori, OvO, One Dimensional Man) at Lignum Studio (Padova, Italy). It ushers in a new era in writing for MoRkObOt, one that revolves around constructing more ambitious structures driven by simpler forms and tighter structures. GoRgO took only three days to record, and was cut live in a minimal amount of takes, testament to the trio’s impressive musical coherence and unity, and the mixing process took another eight days, with no further editing being required.

GoRgO shall be released 16th September via Supernatural Cat. Audio and video excerpts from the album shall follow in the weeks to come, for now, save the release date and let me know if you’ve got any initial questions.