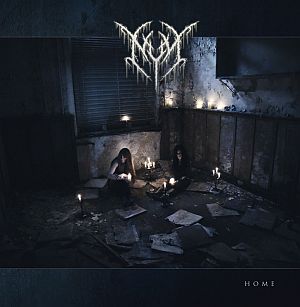 Female-fronted extreme metal duo from Germany, NYX, are premiering the first song from their upcoming album, “Home”, today via Decibel Magazine. Expected to drop on October 30th, 2015, on Agonia Records, “Home” will be the debut offering from the band. Listen to the song “Beyond” exclusively at this link:

NYX is made off Blitz (drums/vocals) and Vinterbarn (guitars/vocals). The band was brought to life in 2011 to explore the endless metastases of the aspiring soul within a musical dimension.

“Home” was recorded and produced in Blackout Studio (Enthroned, Corpus Christii, Emptiness, Lvcifyre) with Enthroned‘s bassist Phorgath behind the console.

The band commented: “The album is all in all a conceptional work. The development of lyriclines, music and visual art was seen as a whole and could not have worked seperately. During the whole process from first note until the finishing touches, we kept our minds open for discovering new ways. Phorgat (Enthroned) and his great, dedicated team was the best choice for bringing our ideas alive. (And as we don’t think about putting music in genres and we’re having an uncommon member-structur, we accept polarization in order not to limit ourselves)”.

“At the studio, we chose a song by song-approach instead of the more often used instrument by instrument-way. This was a very good workway, as we could, (with Phorgat (Enthroned) ) have our full focus on only one song at a time, watch it grow and figure out what it needs to transport the lyrical meaning perfectly”.

“Home” will be available in CD and digital formats.

Pre-orders will be soon available at:
https://www.agoniarecords.com/index.php?pos=shop&lang=en