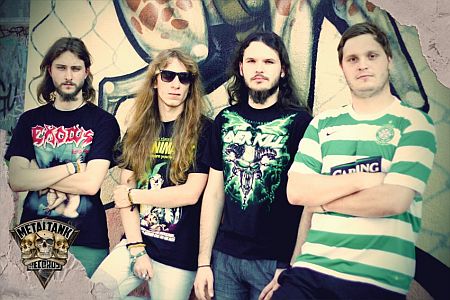 Hello! You play pretty heavy music so let’s start with pretty heavy question. You claim that you play Bay Area influenced thrash metal. That’s surely cool, but someone could say it would be more logical to play European style of thrash since you’re from Europe… so why do you present yourself with American style? Do you prefer US thrash metal also as a listeners?

We love both styles of thrash but we’re closer to Bay Area style even as you mentioned as listeners so we’re therefore more influenced by Bay Area bands but that doesn’t mean we don’t like European thrash bands because we sure do. In our music we try to include many different styles not just thrash.

Your Facebook pages say that you’re influenced by Vio-lence, Forbidden, Forced Entry or Exodus; your label adds also Evildead and Acid Reign… those are surely great bands, but when we exclude Forbidden and Exodus, they’re not so well-known nowadays. When someone says Bay Area thrash metal, most people immediately recalls The Big Four in their minds. Since you didn’t explicitly named those four bands as your influences, I have to ask – do you think that your music is influenced also by Metallica, Slayer, Megadeth or Anthrax? Which of these four do you prefer the most? And if you had to pick up only one favourite band from Bay Area scene, which one it would be?

Well you cant’ actually include Anthrax in Bay Area scene since they are from NY but it woudln’t be fair to those bands to say the don’t have influence in todays music since they started it. Within The Big Four we like Slayer the most. Our favourite band from BA scene is Vio-lence.

Alright, one question about European thrash metal. Especially Germany is known for great oldschool bands like Sodom, Kreator, Tankard or Destruction. How do you like those?

We like them all and they deserve all the credits for bring up thrash up to where it is today. They are not from Germany but Coroner is one band that we also like very much.

Do you think that it’s possible to come up with something new in thrash metal or do you believe that everything was already said in this genre? I really like black metal for example and despite many people say this style is boring and orthodox, there are in fact a lot of avantgarde or experimental bands which really push the genre’s boundaries. But I have to confess that I don’t know any avantgarde thrash metal bands (laughs). All new bands (like Panikk, among others) try to play oldschool thrash, nothing more and nothing less. Do you think that there is still something to be discovered in this style or not? I know this is pretty tough question but don’t you have any needs to try to do something new in thrash?

If you think about nothing new can be done in music then you surely won’t do it and you won’t succeed. We like to play thrash and that is what is all about.

There was a great wave of young bands playing oldschool thrash metal few years ago and every huge metal label wanted to have it’s own young thrash metal band, but most of those bands were from the USA or Great Britain. What do you think is the reason that western Europe, where are the biggest markets, is not so interested in young bands which come from countries east from Germany (with a few exceptions)? Do you think that if you released your debut album five years ago you would be able to have success like Suicidal Angels from Greece for example?

No I don’t think it’s about time because thrash isn’t going anywhere so we will just have to wait if someone sees or invite us to play some venues. Like you said those market are really big but it’s also somehow hard because it’s even tougher to break through all the bands that exist nowadays. Give time a chance and live in the moment! 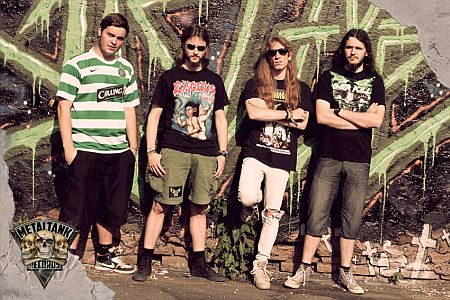 Ok, let’s finally talk about your album now. I unfortunately didn’t have opportunity to hear the record as time of writing these questions, so I’ll have to ask just some generic questions… First of all, can you tell us what should we expect from “Unbearable Conditions”? We’ve already talked about that you play oldschool thrash metal… is the whole album “just” about thrash metal like single “Panic Attack”, or are there any surprises? I noticed that one song (“Revelation of Truth”) should be acoustic for example…

That’s right we have one instrumental song it’s called “Away from Reality” and acoustic song “Revelation of Truth”. Its fast-paced, in-your-face thrash metal plain and simple and if you like that you should really give it a listen.

Also the album’s cover looks pretty oldschool. It’s style reminds me the eighties… it literally screams something like “watch out, oldschool stuff here” (laughs). Did you aim to have a cover which would reflect the music itself so precisely? Who created the artwork?

We wanted something on the cover the reflect our music and lyrics and we wanted it old school. Artwork was created by Mario Lopez from Guatemala.

How would you describe Panikk’s lyrics? Is there one main theme throughout the album, or every song has it’s own story? If you could take one or two songs and describe their lyrics in detail, it would be great… what about “Panic Attack” for example? We can hear this one on YouTube so it wouldn’t be bad to read your comment on it while listening…

There are lyrical themes about human conditions, inner struggles, death, political issues. “Panic Attack” is literally about someone going through a panic attack. Since we have band named Panikk there should be one song about that, right? (hahaha)

Before “Unbearable Conditions” you released only one demo few years ago. Do you think that Panikk’s attitude and music changed somehow since the demo was made? I also noticed that two songs from the demo, “Dismay” and “The Wave of Death”, are also on the album… are there any changes in their new versions? What about the other two demo songs? Do you plan to work with them somehow in the future?

We don’t think that attitude changed what has changed is that we are older you could say more mature and with new lineup everyone that came into the band brought new ideas, freshness you could say. Gapa [Gašper “Gapa” Flere – vocals/guitars] wrote majority of the riffs but then in the arrangements of the songs we all contributed. “Dismay” and “The Wave of Death” were changed one more than the other and the other would be “The Wave of Death”. About the other two songs now we don’t plan to do something with them but we might in the future.

Your country isn’t well known for it’s metal music. Is it possible to describe Slovenian metal scene in a few words? Are there any good bands you like and could recommend to us? I have to confess that I know barely ten metal bands from your country… and my favorite Slovenian band is Laibach, not any metal (laughs).

It’s strong, yeah that’s the word, STRONG. We have a lot of very good bands in Slovenia so don’t be scared checking them out because you won’t be dissapointed. Ten is very good number for such a small country like Slovenia. Great Slovenian bands are Gonoba, Negligence, Eruption, Scaffold, Penitenziagite, Armaroth, Vigilance, Vulvathrone and many more.

We’ve got the last question ahead. Are you planning to support “Unbearable Conditions” with any touring across Europe? If so, is it possible that there will be a gig also in the Czech republic? Thank you very much for the interview and keep rocking!

First if we will do it we will tour around Slovenia and then comes Europe if we get an OK offer because we are small band and we can’t afford something like that. But yet again you can never say never!