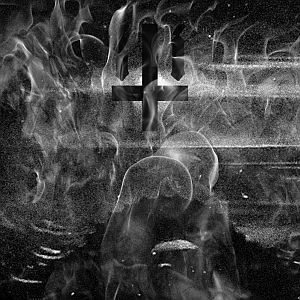 The 53 minute album is divided by 11 songs of purist black metal in its most innovative and spiritual form. Emir’s signature bassy vocals reign over a technical chaos of razor blade guitars and his fast and explosive drumming. The music takes many forms including slow sludgy breaks to doom metal lead parts stitched together by fast and relentless black metal and psychotic guitar solos. The 14- minute ambient ending is also worth mentioning for its use of obscure synthesizers to close off the chaos with a somber maze. This album, along with its philosophical lyrics of chaos myth that include lots of subtexts from the history of theology stitched together to explore a universal and timeless evil embedded into humanity in a multicosmic level and raw but powerful as fuck production will be released through Merdumgiriz where Emir hand makes all the tapes, all this brings to mind the best of underground times in the 90ies. The innovation is embedded in tradition just as light is embedded into blight, this album is an epitome of devotion, hΩpe(lessness) and practice.

Formed by Ruahanathanas known for her work in VIRANESIR. BLLIIGGHHTTED is a psychodrama for exploring the history and philosophy of dark spirituality through correlations and juxtapositions of tradition and degeneration in essence and form. Current members include filmmaker-musician Emir Togrul of YAYLA and the idiosyncratic drummer Merdümgiriz. The project is releasing the first album to be made solely by Emir Togrul through Merdumgiriz Records July 29th.

As with his work on YAYLA, Emir Toğrul’s grand vision, each No Temple CD, Tape, t-shirt and patch is handmade; Emir sprays the discs, cuts and inserts the prints for the jewel case, jacket and tape making all non-machined parts from scratch. All current and upcoming merch comes to fans direct from the hand of the creator himself; there is no limit to the number of “No Temple” merch, as long as the man is alive. Toğrul is also co-owner of Merdumgiriz.

For more BLLIIGGHHTTED, including complete discography and merch, visit the links below: